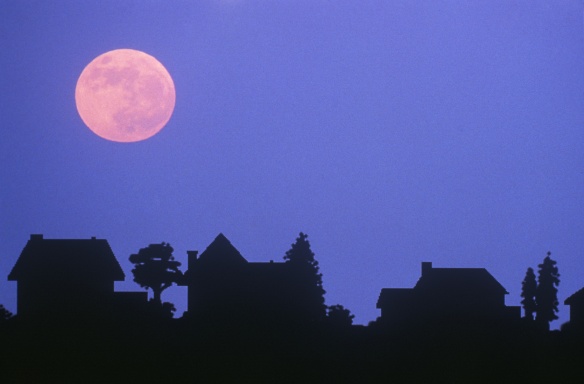 The human body is 55 to 78% water (depending on sex and age) so it makes sense that the gravitational pull of the moon would affect us, right?  Many scientists point out that the biological tide theory doesn’t hold. On The Skeptics Dictionary website Robert Todd Carroll says, “Given the minute and bounded mass of fluid contained within the human body, compared to the enormous and free-flowing mass of ocean water, and given the enormous distance to the moon, the lunar pull on the human body is negligible.”

Theories about the moon’s influence on animal behavior are more widely accepted. Although the topic of whether or not the moon affects human behavior is controversial, there is plenty of anecdotal evidence and some scientific evidence indicating that it does.

I, for one, have a difficult time sleeping around the full moon. And my husband, who suffered from Alzheimer’s disease, exhibited more agitated behavior when the moon was full.

Studies have shown that the lunar cycle has an impact on fertility, menstruation, and birth rate.  Admittance to hospitals and emergency units due to cardiovascular and acute coronary events, arterial hemorrhages in the stomach and esophagus, diarrhea, and urinary retention correlate with moon phases. Other events linked to human behavior, such as traffic accidents, crimes, and suicides, seem to be influenced by the lunar cycle.

In the 1600’s Sr. William Hale, a distinguished British physician and medical biographer, wrote, “The moon has a great influence in all diseases of the brain, especially dementia.” The British Lunacy Act of 1842, which dismissed crazy behavior as being caused by the full moon, built on his theory.  In fact, as recently as 1940 a British soldier who was charged with murder pleaded “moon madness.”

Alan M. Beck of Purdue University conducted a longitudinal study to objectively examine the lunar influence on the frequency, duration, and intensity of behaviors in individuals with Alzheimer’s disease.

He examined wandering, anxiety, physical aggression, and verbal confrontation. His study concluded that individuals with Alzheimer’s disease did, in fact, exhibit significantly more erratic behaviors during periods of the full moon, and that these behaviors were of greater duration during that time. The objective analysis that a lunar influence on behavior in Alzheimer’s individuals exists validates a long-standing belief held by many healthcare providers.

If you’re a caregiver for someone with dementia, you’ve probably seen some odd behavior in your loved one around the full moon. And if you have trouble sleeping or feel restless or anxious during the full-moon, you’ve personally noticed the effects.

Here are some ways to calm the nerves and odd behaviors during the full moon or anytime.

Aromatherapy can be a resource of comfort to you and your care partner by providing an easy, natural way to reduce stress and anxiety and uplift mood. The following oils can be used in a diffuser, or put in a bath or fragrance free moisturizer. They can also be sprayed on a pillow or handkerchief.

Citrus oils are generally refreshing and uplifting for the mind and emotions, relieve stress and anxiety, and are useful for odor management and appetite support. Consider: bergamot, grapefruit, lemon, and orange.

Floral oils are often used as a personal fragrance and are useful to relieve anxiety, depression, and irritability. These oils are useful as an inhaler, in a body lotion, and for the bath. Consider: clary sage, geranium, lavender, rose, and ylang ylang.

A nervine is a plant remedy that has a beneficial effect upon the nervous system.  Nervines are especially useful during times of stress because they have a strong relaxing and calming effect without producing a dulling, “hang-over” side effect.  They also tone and restore the nervous system to a more balanced state.  Some nervines are also anti-spasmodic, meaning they relax the peripheral nerves and the muscle tissue, which in turn has a relaxing effect on the whole system.

The main types of nervines are tonics, relaxants, and stimulants.

The next time you’re feeling nervous, agitated, restless or hyped up, calm your nerves with a nervine herb or aromatherapy. If your loved one has Alzheimer’s or dementia and is on medication, please check with the physician to make sure they do not interact with the nervine herbs.  Use pure essential aromatherapy oils to lower risk of allergy.

If all else fails, you can always go outside and howl at the moon.

Studies showing we are affected by the full moon

1. More babies are born around the full moon. A study in Kyoto, Japan looked at 1007 natural births and found there was significant increase in births when the moon was closest to the earth. Results of this study suggest that the gravitational pull of the Moon has an  influence on the frequency of births.

2. Do you have trouble sleeping around the full moon? Sleep researcher Christian Cajochen at the Psychiatric Hospital of the University of Basel in Switzerland conducted a four-year lab study to see if he could show that it is physiologically true that many people have difficulty sleeping during the full moon.  His researchers monitored the brain activity, eye movements and hormone secretions of 33 volunteers in the lab while the participants slept. All the participants were healthy, good sleepers, and did not take any drugs or medication.Unexpectedly, the scientists found “the lunar cycle seems to influence human sleep, even when one does not see the moon and is not aware of the actual moon phase,” Cajochen said. After reviewing their data, the scientists found during the time of the full moon, brain activity related to deep sleep dropped by 30 percent. People also took five minutes longer on average to fall asleep, and they slept for 20 minutes less overall on full-moon nights. The volunteers felt as though their sleep was poorer when the moon was full, and they showed diminished levels of melatonin, a hormone known to regulate sleep and wake cycles. “It took me more than four years until I decided to publish the results, because I did not believe it myself,” Cajochen told LiveScience. “I was really skeptical about the finding, and I would love to see a replication.”

Barbra Cohn cared for her husband Morris for 10 years. He passed away from younger-onset Alzheimer’s disease in 2010. Afterward, she was compelled to write “Calmer Waters: The Caregiver’s Journey Through Alzheimer’s & Dementia” in order to help other caregivers feel healthier and happier, have more energy, sleep better, feel more confident, deal with feelings of guilt and grief, and to ultimately experience inner peace. “Calmer Waters” is available at Amazon, Barnes & Noble, Boulder Book Store, Tattered Cover Book Store,  Indie Bound.org, and many other fine independent bookstores, as well as public libraries.

This site uses Akismet to reduce spam. Learn how your comment data is processed.